Despite all the headlines and headline statistics that say that the Michigan economy is “back” the reality is that many Michiganders are worse off today than they were prior to the onset of the Great Recession. The table at the end of this post displays real median wages for all Michigan full time, year round workers in Michigan and the U.S. and by education attainment in 2007 and 2013. (You can click on the table to expand it.)

In addition to lower real wages, one of the main reasons that the economy is not working for many Michiganders is more and more of us are now contingent workers. Nathan Bomey in a Detroit Free Press article, using data complied by Don Grimes of the University of Michigan, explores how extensive the switch to contingent workers has been in Michigan. Bomey writes:

Although economists have largely credited the auto industry for Michigan’s economic recovery, a closer look at economic data reveals a more nuanced picture. Taken together, about 36% of Michigan’s job gains from 2009 through 2013 came from the temporary staffing sector and self-employment, according to a review of federal jobs data completed by University of Michigan economist Don Grimes for the Free Press.

… Though the temporary help category accounts for only 2.8% of Michigan’s workforce, it added 45,233 jobs from 2009 through 2013, representing a disproportionate 18.6% of the job gains in the state during that period, according to data drawn from the U.S. Bureau of Labor Statistics’ Quarterly Census of Employment and Wages.

Similarly, the number of Michigan residents who considered themselves self-employed contractors also rose by 18.6% — remarkably, the same percentage as temporary help — during that same time period, increasing by 51,715 jobs, according to U.S. Bureau of Economic Analysis figures. Some of those positions reflect people who are working a regular job and finding work on the side, but the figures indicate that more Michiganders are charting their own path to pay their bills.

“This highlights how the shifting nature of employment has really put a crimp on people’s income,” U-M’s Grimes said in an e-mail.

And many contingent workers suffer from not just low wages but also poor working conditions. In a must read New York Times article entitled “Working Anything but 9 to 5: Scheduling Technology Leaves Low-Income Parents With Hours of Chaos” describes what work is like for an increasing number of Americans. The Times writes:

“Scheduling is now a powerful tool to bolster profits, allowing businesses to cut labor costs with a few keystrokes. … Yet those advances are injecting turbulence into parents’ routines and personal relationships, undermining efforts to expand preschool access, driving some mothers out of the work force and redistributing some of the uncertainty of doing business from corporations to families, say parents, child care providers and policy experts.”

We need to get beyond celebrating Michigan’s improved economy and get serious about realizing Governor’s Snyder’s goal of more and better jobs for all Michiganders. Clearly the state has a long way to go to realize that goal. 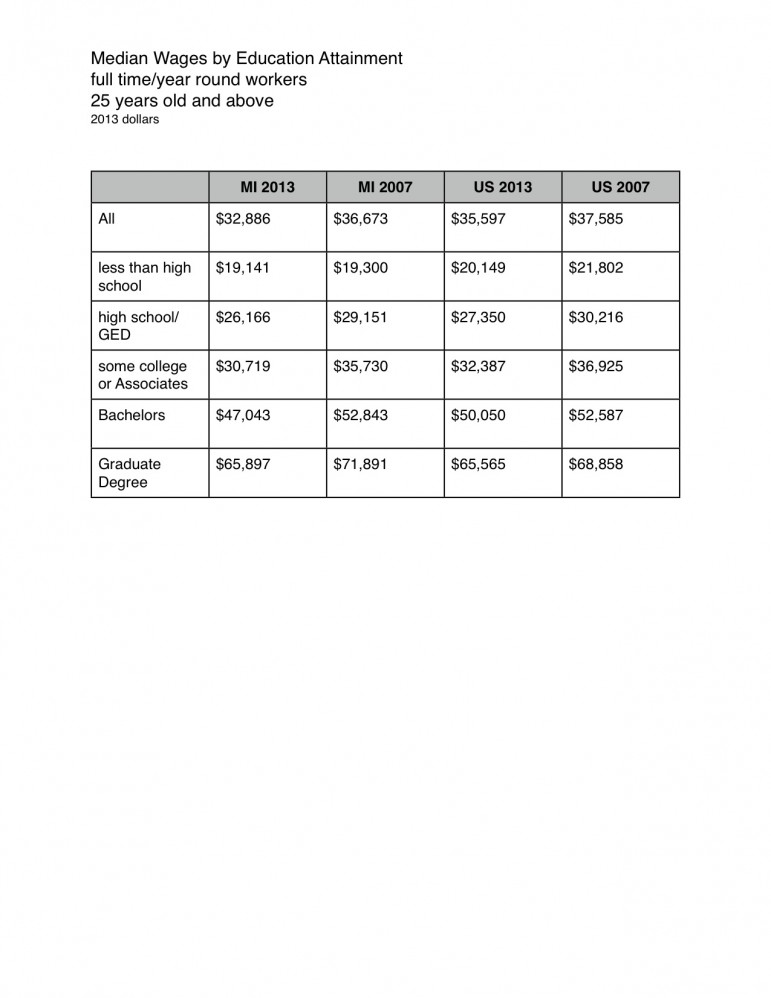 The chart below makes clear, once again, that those with a four-year degree or more…