Over two decades of research has taught us one fundamental lesson: Talent = economic growth. The key to retaining and attracting talent is creating places where people want to live, work and play.

Then-New York City Mayor Michael Bloomberg got it right when he wrote in a Financial Times column: “The most creative individuals want to live in places that protect personal freedoms, prize diversity and offer an abundance of cultural opportunities.”

Our research on the changing American economy has led us to conclude that the regions with the highest concentration of those with a four-year degree or more are going to be the places where high-wage, high-growth enterprises concentrate. Not low-tax, small government, so-called business-friendly regions.

Since the publication of our report, “A Path to Good-paying Careers for all Michiganders,” two high-profile corporate location decisions have made even clearer the importance of quality of place to future economic well-being. First, Amazon decided that neither metro Detroit or metro Grand Rapids had the talent or the transit to make the list of the 20 finalists for their 50,000 high-paid jobs HQ2. Michigan’s two big metros weren’t not worthy of consideration because neither Detroit or Grand Rapids has the talent concentrations needed by knowledge-based service companies.

On the positive side, Ford decided to center their transition to mobility in downtown Detroit. Ford has learned the lesson that far too many Michigan business leaders and policymakers have not: that creating places where young talent wants to live and work is essential to economic success. They have learned that what matters most to their economic survival is talent, and that their biggest competitive threats are located where young professionals are concentrating.

This also is a prime lesson to be learned from our recently published metro Minneapolis case study “Regional Collaboration Matters.” Metro Minneapolis is doing a far better job than metro Detroit and metro Grand Rapids in retaining and attracting young professionals. They have, for decades, made creating a place where people want to live and work an economic development priority, and placed an emphasis on the cities of Minneapolis and St. Paul. The payoff is that on every measure of economic well-being––including the proportion of adults who work and household income––they are a national leader, while metro Detroit––even being the North American home of one of the world’s great industries––is now a national laggard as is metro Grand Rapids.

And largely because of the success of metro Minneapolis, Minnesota is the Great Lakes region’s best performer, by far, on every measure of individual and household economic well-being.

One might ask, “But what does quality of place have to do with good-paying careers for all?” The answer is that talent is mobile, and increasingly, where they go, high-wage knowledge-based enterprises follow. Where you have concentrations of high-wage workers you get increased demand for local services. Their spending power ripples through the region’s economy via increased demand for retail, hospitality, construction and other locally provided goods and services. In the past, that regional demand in Michigan was driven by high-wage manufacturing workers; today, it’s driven by high-wage professionals and managers. 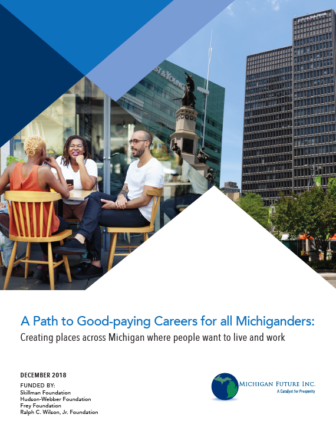 Michigan lags the nation in having communities that are powerful talent attractors. We are in desperate need of a placemaking vision that allows all of its regions to develop and implement their own strategies to be places where people want to live, work and play. And it needs to make sure that metro Detroit and metro Grand Rapids are able to compete with talent magnets like Chicago and Minneapolis.

In our new report, “A path to good-paying careers for all Michiganders: Creating places across Michigan where people want to live and work,” available now, we spell out why placemaking is so critical, and what we believe are the most impactful state policies to improve the attractiveness of communities across the state.

When The New York Times wrote about Ford’s purchase of the long-abandoned Detroit train station, the article’s subtitle jumped out at us: “By renovating a symbol of the city’s decline, the company hopes to create a magnet for the talent needed to prevail in the next automotive era.” Ford gets that talented people are concentrating in vibrant, dense communities. We need to foster those communities to succeed in the global era. It’s time the rest of Michigan’s business, community, and political leaders start acting on that same lesson.