Ever since hurricane Katrina the press, policy makers and other opinion leaders have pointed to Louisiana as a place to look for reforming public education. Primarily because in New Orleans they did away with teachers unions and largely went to providing education by charter schools, rather than a traditional public school district.

Michigan has been on the lets learn from Louisiana bandwagon. One problem: Louisiana has terrible k-12 student achievement results. They may have good PR and be “right” for many on education ideology, but when it comes to students learning the results are even worse than Michigan.

And Michigan as we have explored is not doing well at all. The table at the end of this post provides the grades the The United States Chamber of Commerce Foundation gives Louisiana, Michigan and Massachusetts on student achievement metrics in their Leaders & Laggards: A State-by-State Report Card on Educational Effectiveness report.

Across the board Louisiana has Ds and Fs. A little worse than Michigan. Massachusetts gets As. Maybe most important, the nation’s leading business trade association gives Louisiana an F and Massachusetts an A in Postsecondary and Workforce Readiness.

When it comes to urban education, where Louisiana is supposedly making great progress, the Leaders and Laggards report, using NAEP (the so-called nation’s report card) data, provides proficiency scores for 4th and 8th grade reading and math for both African American students and low income students. Louisiana’s African American students proficiency on the four tests ranges from 9-13 percent. For low income students proficiency on the four test ranges from 14-19 percent.

The New York Times in a terrific article on Massachusetts education outcomes entitled “Expecting the Best Yields Results in Massachusetts“ describes the state’s approach to improving student outcomes this way:

The three core components were more money (mostly to the urban schools), ambitious academic standards and a high-stakes test that students had to pass before collecting their high school diplomas. All students were expected to learn algebra before high school. … Also noteworthy was what the reforms did not include. Parents were not offered vouchers for private schools. The state did not close poorly performing schools, eliminate tenure for teachers or add merit pay. The reforms did allow for some charter schools, but not many. Then the state, by and large, stayed the course.

Seems like, if the goal is better student achievement and ultimately postsecondary and workforce readiness, Michigan should be looking to A rated Massachusetts––not F rated Louisiana––to learn what policies lead to high student achievement. 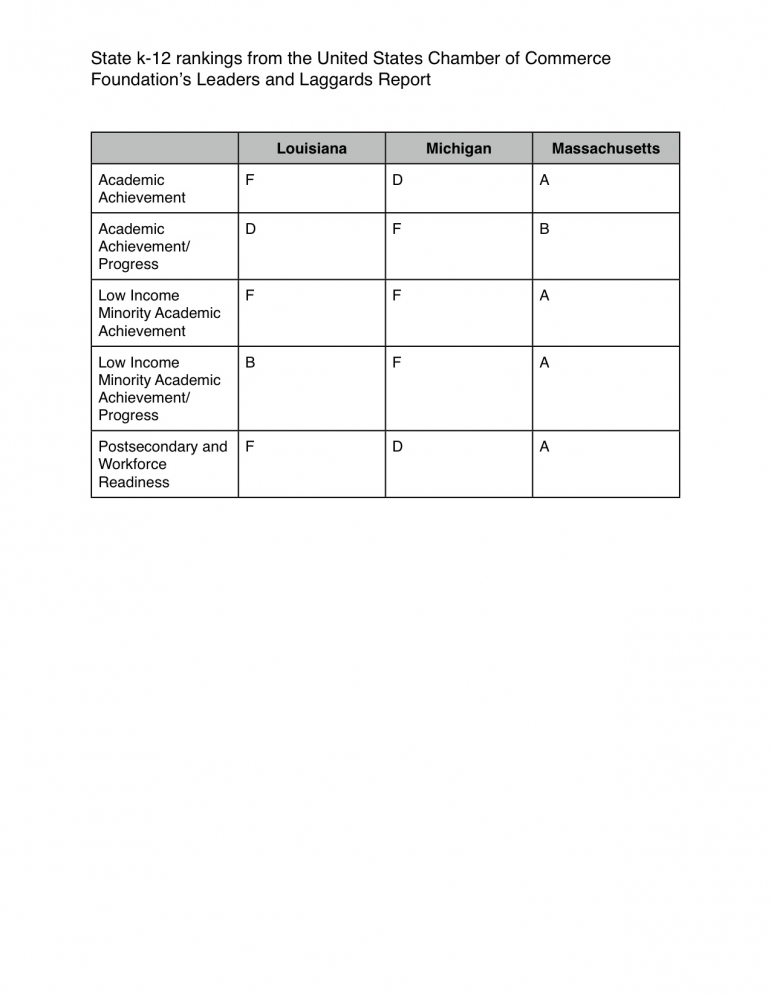 The core belief of Michigan Future is that because of globalization and technology, what made…

Prosperous states are open and welcoming to talent of all types