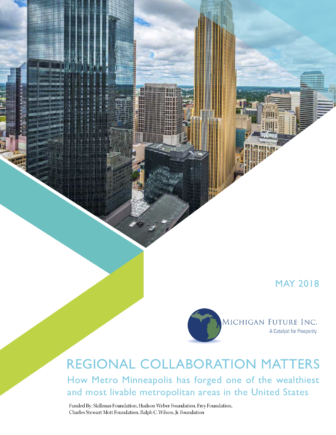 We are committed to the goal of re-creating a high prosperity Michigan. We believe the goal of state economic policy should be raising household income for all Michiganders. High prosperity is more than just low unemployment; it is being a place with a broad middle class where wages and benefits allow families to pay the bills, save for retirement and the kids’ education, and pass on a better opportunity to the next generation.

For years we have used Minnesota as a comparison state, because it is the Great Lakes state that has enjoyed the best economic outcomes, by far. Michigan could have a quality of life like Minnesota; why doesn’t it? We began our policy work asking that question, with a case study of Minnesota.

That report proved so successful that we asked author Rick Haglund to follow it up with a case study of the policies that have made metro Minneapolis the most successful region in the Great Lakes. The difference in economic outcomes between Minnesota and Michigan can largely be explained by the superior performance of metro Minneapolis compared to metro Detroit and metro Grand Rapids.

Download the report to find out what we uncovered about how leadership and regionalism–in addition to policy priorities we’ve talked about for years like placemaking, education, and being welcoming to all–have made metro Minneapolis 12th in per capita income among cities with more than 1 million people. Meanwhile, here in Michigan, metro Detroit and metro Grand Rapids flounder at, respectively, 30th and 38th.

We can do better, and this report shows us one possible path for doing so.

“What Metro Detroit and Grand Rapids can learn from regional collaboration in the Twin Cities,” interview of report author Rick Haglund on Michigan Radio’s Stateside, May 22, 2018.