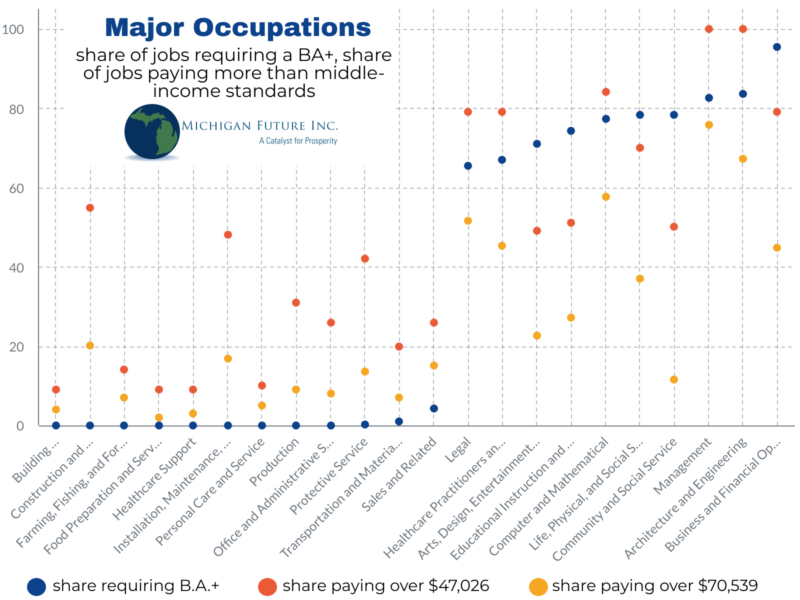 At Michigan Future we are always working to understand the reality of the economy and labor market in Michigan. We try to get beyond the assumptions and the holdover picture we have of how people earn money, and how much of it, that we still carry around from the 20th century. Today we’re sharing two new infographics that powerfully organize some data recently analyzed for us by Don Grimes of the University of Michigan. These data reinforce the fact that Michigan’s economy is divided quite dramatically into two major tiers, where working families in the lower tier struggle to afford basic necessities. And what puts people in the higher tier is largely the possession of a bachelor’s degree.

Most jobs that pay middle class wages require a B.A.

We overlaid the same data with information from the Michigan Bureau of Labor Market Information and Strategic Initiatives from 2018, about the share of jobs in each occupation that require a bachelor’s degree.

This chart shows starkly what we’ve been calling our “two-tier economy.” The difference between the tiers? The possession of a B.A. On the left, you can see 12 occupation categories where very few jobs require a B.A. (in each occupation, less than five percent require a B.A., with many at or near zero). Then, between the categories of “sales and related” and “legal,” there’s a huge jump. From 4.3 percent of jobs requiring a B.A. to 65.4 percent. And you see a similar jump in earnings.

As we continue to look at data on the economy, we continue to learn more about how the fundamental structure of our economy leaves so many families struggling to pay the bills. There are simply too many jobs in our labor market that don’t pay a middle-class wage.

The New Face of Economic Growth

So says Google's Chairman Eric Schmidt in a speech at SXSW. Schmidt said: "If all you…