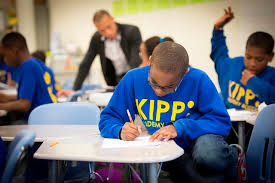 The announcement that KIPP will open a K-12 charter school in Detroit is good news for Detroit students. KIPP is the nation’s largest nonprofit charter school network, with more than 110,000 students ranging from preschool to 12th grade in 255 schools across the county.

What KIPP brings to Detroit, first and foremost, is a commitment that all of their student will complete college. Chalkbeat in a highly-recommend article about KIPP’s approach to college completion writes: “Throughout, an overriding mission has fueled the schools: “to help students climb the mountain to and through college,” as CEO Richard Barth put it last year.”

KIPP will bring that overriding mission to Detroit. In an interview with Chalkbeat Detroit, Candace Rogers, the superintendent of the new school, said: “We make a two-decade commitment to our students’ educational journey: beginning in kindergarten and continuing for a decade after eighth grade (to and through college).”

As we detailed in a 2016 post, KIPP students are getting breakthrough college completion outcomes:

Reading Richard Whitmire’s The B.A. Breakthrough reminded me why Michigan Future has been supportive of charter schools from their inception in Michigan more than a quarter of century ago. Largely because they provide an alternative to chronically failing big city school district’s schools.

Whitmire chronicles how the best of the national charter networks have 40-50 percent of their graduates earning life-changing four-year degrees by six years after graduating high school. Particularly inspiring is the stories he tells of the success students of these charters now enjoy as adults that would, almost certainly, not have happened if they did not have an option of attending a charter school. These are the kind of results we hoped that charter schools serving predominantly low-income minority students in Michigan would achieve.

That brings us to our disappointment with Michigan charter schools. The simple reality is the charter sector in Michigan has not produced schools with the kind of stellar four-year degree completion rates Whitmire chronicles. College completion data for six years after high school graduation is only available for the graduating class of 2012 or before. Of the graduating class of 2012 the six year completion rate for three of the high profile Detroit area charter schools are 22.7 percent for the Henry Ford Academy; 16.5 percent for the Thompson Foundation‘s University Preparatory Academy; and 8.8 percent for Cesar Chavez Academy.

To us there are three core differences between the charters here and the successful national charters:

KIPP is one of the national networks Whitmire writes about. KIPP brings to Detroit all three of the characteristics of schools that are achieving breakthrough student outcomes: four-year degree completion obsession; rigorous academics; and college advising.

The Future of Factory Work

We support, but are disappointed in, charter schools

Reading Richard Whitmire's worth reading The B.A. Breakthrough reminded me why Michigan Future has been…