By far the most reliable

way to raise Michiganders’ household income is increased education attainment. The table below makes clear: the higher one’s education attainment the more one works and earns. The most reliable path to a good-paying career is with a bachelor’s degree or more, in both STEM and non-STEM fields. 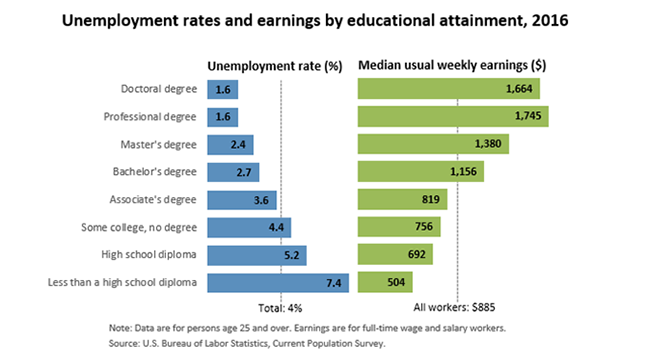 Those who will do the best in a labor market characterized by accelerated creative destruction are those who have the agility and ability to constantly switch occupations. The notion of a career ladder––predictable and linear steps upward––in a world that is constantly changing is obsolete. Rather people will need to be like rock climbers––constantly adjusting to new opportunities and challenges, and then resourceful to take advantage of those opportunities. Add to that increasingly the ability to be your own employer. Finding good-paying work and good benefits and managing your own finances. These are the kind of skills that are developed best by earning a four-year degree, particularly in the liberal arts.

Unfortunately Michigan is a national laggard in education attainment. Consistently ranking in the thirties among states in the proportion of adults with a four-year degree or more and even lower in K-12 student achievement.

Many believe that Michigan’s low student achievement is largely a result of what children bring with them to school, not poor schools. That family and neighborhoods trump schools. Families and neighborhoods, of course, matter. But the reality is, across the country, there are many early childhood programs (both home based and center based); K-12 school districts (both traditional public and charter); and higher education institutions that are demonstrating that quality education can get high student outcomes no matter what the students’ background.

One can make a strong case that we have a human development system that tolerates high levels of student failure. Too many kids leaving early childhood programming not ready for kindergarten; way too many students leaving high school not ready for post-secondary education; far too many who enroll in post-secondary institutions failing to earn a degree or even a meaningful credential. If anything the performance of the adult training system is even worse with very low completion rates and many who do complete not finding good-paying work.

We need to both raise the bar so that all education institutions are accountable for meaningful success of their graduates and that those held most accountable are those in charge of the institution/enterprises. Policy incentives should drive–-not discourage––all education providers to serve well children growing up in non-affluent households.

To thrive in the new economy, workers have to be adaptable, have a broad base of knowledge, be creative problem-solvers and be able to communicate and work well with others. In other words, workers need to be really good at all of the non-algorithmic skills computers aren’t good at yet.

The best definition we have found for this complex set of skills comes from the book Becoming Brilliant, by learning scientists Roberta Michnick Golinkoff and Kathy Hirsh-Pasek, who label these skills the six Cs: collaboration; communication; content; critical thinking; creativity; and confidence.

These are the skills students will need in order to complement rather than be replaced by machines, solve today’s problems, and create new solutions to problems we can’t yet envision.

The Bureau of Labor Statistics (BLS) just released their job projections for 2016-2026. The Atlantic…