A Path to Good-paying Careers for all Michiganders, recommends big changes in state economic policy. The need for such an agenda is clear.

In the seventh year of a national economic expansion––and an even stronger rebound from near bankruptcy of the domestic auto industry––too many Michigan households are struggling. Michigan’s substantial economic challenges are clearly structural.

In good times and bad far too many Michigan households are experiencing declining or stagnant incomes. Over the last decade and a half––no matter who was in control in Lansing and Washington––Michigan has moved from being a high-prosperity to a low-prosperity state. 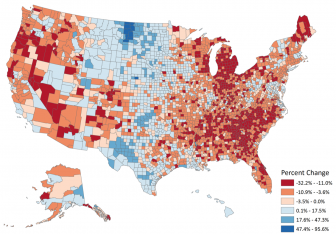 As the map from the Harvard Business School depicts every county in Michigan has suffered a major decline in median household income over the past fifteen years. In terms of per capita income––the best measure of economic well being––Michigan has gone from two percent below the national average in 2000––the last time the domestic auto industry was booming––to eleven percent below in 2015.

Once again this pattern is true irrespective of race. Racial discrimination is an ongoing reality in employment, education, housing and the criminal justice system; but class is now the main dividing line in the American economy and increasingly class is defined by college attainment.

As you might expect, I have been asked a lot about my reaction to Governor…