When my husband and I moved to a high-rise building near the Renaissance Center in Detroit in 2000, calling our new neighborhood “downtown” would be an aspirational description at best.

The city center we moved to lacked amenities so basic that even our apartment’s stunning views of the Detroit River and Belle Isle barely made up for it. We had to get into a car to reach the closest drug store, movie theater, dry cleaners, and grocery store. Even the most attractive thing about the neighborhood – the Detroit River – was barely accessible by land because the riverfront of those days was a long-abandoned industrial wasteland.

When our son’s arrival made our apartment too cramped for three people six years ago, my husband and I thought about buying in one of the city’s traditional residential neighborhoods, but the pull of downtown was hard to resist. Folks thought we were crazy when we told them we were moving just a mile away to a near-east neighborhood near the edge of downtown because – even then – building a life near the city’s center seemed like far from a sure bet.

Today, the signs of rebirth in my neighborhood are undeniable. Long-shuttered storefronts near Eastern Market have sprung back to life as hip restaurants, coffee shops and other millennial magnets. And new housing is being developed and built in and around downtown at an impressive pace.

But the primary amenity that made me move to and stay downtown is my home’s proximity to the Dequindre Cut Greenway and the Detroit River Walk . I’ve watched my son play with new friends and learn to ride his bike in these beautiful, art-infused green spaces, so thoughtfully planned and beautifully realized. We were among the first to experience the Michigan Department of Natural Resources’ Outdoor Adventure Center when it opened on the Dequindre Cut a few years ago. We love to take in summer concerts at the Chene Park amphitheater on the Detroit River. And after all these years, the view when I take a walk or ride my bike on the River Walk still takes my breath away. It’s like the city’s greatest assets are in our backyard. 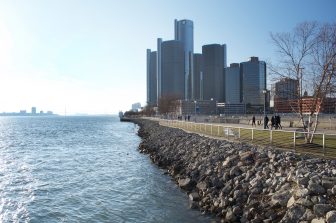 Turns out I’m not alone when it comes to choosing a home simply because of its proximity to green space. New York Times architecture critic Michael Kimmelman recently wrote about efforts in Chicago and Philadelphia to transform abandoned and underused land into green spaces. The city’s mayors are betting on revitalized parks as a way to boost civic pride, not to mention housing values. As an added bonus, early statistics show that violent crime is practically non-existent in these newly vibrant public spaces in Philadelphia.

I recognize that mine was not exactly a novel approach to home buying: There’s a reason real estate surrounding Central Park is at a premium in Manhattan. But with a few exceptions, Detroit’s long-neglected parks have hardly been a draw for home buyers in recent decades.

In fact, there was a time when living near a Detroit park could saddle a homeowner with more responsibilities than amenities. A few years ago, my father, who lives in a sprawling condo that faces Palmer Park, called the city’s recreation department to offer to pay for new basketball hoops in the park out of his own pocket because he was tired of seeing disappointed kids playing ball with imaginary baskets. The city later installed the hoops, but many of Palmer Park’s improvements can be attributed to the city’s partnership with People for Palmer Park – a non-profit organization that has created programming for and brought structural improvements to the park. For example, the group worked with the administration of former Detroit Mayor Dave Bing and Lear Corporation to bring a splash park and play scape to a section of the park that was once home to an abandoned swimming pool. It’s a hopeful sign that citizens, non-profits and city officials are working together to improve public spaces like Palmer Park.

It matters because Michigan desperately needs an infusion of talent and educated millennials are obsessed with living in walkable, vibrant, urban communities. Global commercial real estate services firm Avison Young issued a report last year that predicted that communities that are rich in amenities will hold on to millennials, even as their predecessors de-camped for the suburbs once they started having children.

“Millennials will choose to locate where they can access the city center but live in neighborhoods that still offer an urban experience that most closely resembles the denser downtown. Inner city neighborhoods, in-fill locations, improved public space and walkable amenities will continue to attract some millennials as their life circumstances change.”

Detroit still has a long way to go before we can offer amenities that rival cities like Chicago, but I’m excited that there seems to be a recognition – from both non-profit and city leaders – that green spaces are a vital feature of a functional and attractive city.

I’m still pulling for Detroit to provide more and better amenities – not to mention basic services – to make the city a magnet for talent. In the meantime, my family and I have five glorious months of play at the river’s edge each year. It’s not enough. But it’s pretty good.

Choosing A Model for Michigan

I started a presentation at the West Michigan Policy Forum with a thought experiment. Which…

The folly of government picking occupations