For most of the 20th Century Michigan was one of the nation’s most prosperous states. Largely because the auto industry employed hundreds of thousands at high wages. Anchored by blue collar factory workers. Michigan’s prosperity was highly correlated with how well the domestic auto industry––now the Detroit Three––was faring. When the Detroit Three did well, so did Michigan. When they struggled, so did the state.

Neither are true today. Michigan is now one of the nation’s poorest states. Falling from 18th in per capita income in 2000 to 37th in 2013. And we no longer are prosperous when the Detroit Three are doing well. Its a lesson we seem not to have learned.

The disconnect between the fortunes of the Detroit Three and Michiganders well being is clearly demonstrated in the chart below from the Senate Fiscal Agency from their March, 2015 State Budget Overview 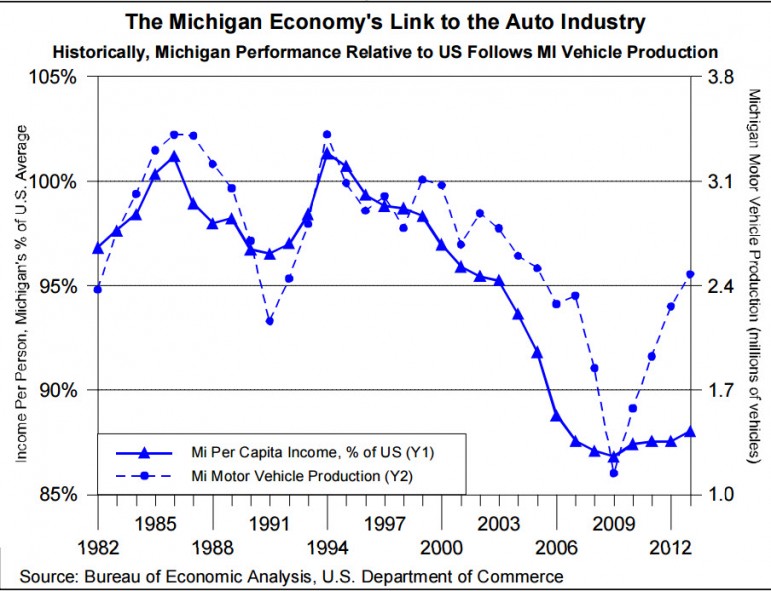 Why has the correlation ended between the Detroit Three and Michigan prosperity? Largely because the auto industry needs far fewer production workers than in the past (production/assembly is now highly automated) and, the jobs that remain are lower paying. Manufacturing in general, and in the auto industry more specifically,  is no longer the mass employer it was during the 20th Century nor does it provide the high paid work it once did. You can’t build a mass middle class in the 21st Century in a factory-based economy. End of story!

B.A. holders value their education most

The Federal Reserve in its Report on the Economic Well-Being of U.S. Households in 2019…

Placemaking lessons from Ford and Minneapolis