Michigan residents are clamoring for the Legislature to better fund the state’s crumbling roads, bridges and mass transit.

But lawmakers have repeatedly failed to boost taxes that would raise the $1.2 billion more a year that Gov. Rick Snyder has said is necessary to fix the roads.

Minnesota years ago developed a comprehensive transportation funding system that has resulted in the state having some of the highest-quality roads and bridges in the country.

It also spends heavily on statewide public transit and on light rail lines in the Twin Cities. Effective mass transit in urban areas is a key element in retaining and attracting young college graduates who are gravitating to cities.

The report, which drew on data from transportation industry groups and various government agencies, found that just 11 percent of Minnesota’s roads were in poor condition, compared to 22 percent of Michigan roads considered to be in bad shape.

Just 12 percent of Minnesota’s bridges are deficit or obsolete, according to the White House report. Twenty-seven percent of Michigan’s bridges need repair or replacing, the highest percentage in the Great Lakes region.

Bad roads and bridges are hitting the pocketbooks Michigan motorists hard in the form of costly repairs. They pay an annual average of $538.96 in bad-road-related repairs, the highest among motorists in the Great Lakes States.

What about Minnesota? You guessed it. Motorists there pay an average of $369.25 in repairing damage caused by poor roads, the lowest in the Great Lakes region, according to the White House report.

The state funds its portion of the transportation budget through three major taxes; a gasoline tax, a vehicle registration tax and a sales tax on car and truck purchases.

The state assesses a 6.5 percent sales tax on the purchase of cars and trucks. Forty percent of the revenue from that tax is allocated to funding public transit.

Michigan last boosted its gas tax in 1997 from 15 cents a gallon. The state also relies on vehicle registration fees to support its portion of transportation funding.

Michigan assesses its 6 percent sales tax on gasoline purchases, but the money goes to fund schools and general government operations.

Minnesota also is far ahead of Michigan in establishing urban light rail systems. Several lines operate in the Twin Cities, including the Green Line, which started service in June, connecting Minneapolis, St. Paul and the University of Minnesota.

But construction started this month on the 3.3-mile-long M-1 streetcar line along Woodward Avenue in midtown Detroit that backers hope will spark housing and retail development. 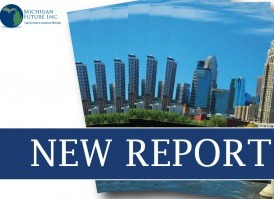 A vibrant central city is vital to regional prosperity